Senate, yesterday, urged President Goodluck Jonathan to sack Ms. Aruma Oteh, Director-General, Security and Exchange Commission, SEC, saying it would not have anything to do with the commission if she remained the head.

It also threatened not to screen members of the commission’s board.

According to a statement by the Chairman, Senate Committee on Capital Market, Senator Ayoade Adeseun, ACN, Oyo Central, the move became imperative because of her reinstatement by the Presidency in flagrant disregard of resolution of the House of Representatives, which asked the President to sack her.

“Consequently, the House passed a resolution based on the report of that Committee that the President should sack the Director-General, SEC, Ms. Aruma Oteh.

“The House further resolved that should the President fail to comply with its resolution, the House would cease to accord any recognition to the Ms. Oteh. 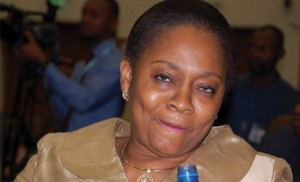 “You are also aware that instead of complying with the resolution of the House, the DG was reinstated in flagrant disregard of the resolution.

“Again, on resumption from recess in September, the House re-affirmed its earlier resolution and gave a 14-day ultimatum for compliance by the executive arm of government. Till date, that ultimatum has been ignored.

Her ‘crimes’
“Furthermore, since Ms. Oteh’s resumption of duty, there have been series of protests against her manner of managing the agency.

“Rather than seek amity with the workforce, she has continued with the same style of administration for which even the Presidential Review Committee indicted her.

“Specifically, the staff have again accused her of highhandedness, sole administratorship, intimidation, insensitivity, malice and a headlong drive for vengeance.

“Consequently, the Senate Committee on Capital Market, at its meeting of September 26, considered these and other goings on at the commission, all of which could negatively affect the Nigerian capital market and came to the conclusion that if this trend is not arrested, the capital market might be brought finally to its knees, with attendant deleterious effect on the economy of the country.

“The committee, therefore, resolved to support the position of the House of Representatives that the D.G, SEC, be removed forthwith. The committee also resolved to have nothing to do with Ms. Arumah Oteh for as long as she remains at the helm of affairs at the Security and Exchange Commission.’’

The malicious and defamatory report in a section of the online and Print media about the Accountant General of the federation, which I consider...