The UK government has agreed to pay £2.2m ($3.5m) to a Libyan dissident and his family who say MI6 was involved in their illegal rendition.

Sami al-Saadi and his family were forcibly transferred to Colonel Muammar Gaddafi’s Libya in 2004.

Their lawyers say the pay-out ends the family’s legal action against the UK, in which they were arguing MI6 was instrumental in their kidnap.

The UK still faces a further allegation of rendition from another Libyan.

Mr al-Saadi was a leading Gaddafi opponent and says that he was forced on board a plane in Hong Kong, along with his wife and four children, in a joint UK-US-Libyan operation.

The family were flown to Libya where Mr al-Saadi was subsequently held and tortured.

Even now, the British government has never given an answer to the simple question: Were you involved in the kidnap of me, my wife and my children?”

The allegations came to light during the overthrow of Colonel Gaddafi, when documents relating to the alleged agreement to transport the family were found in Libya. the documents, found in the office of Col Gaddafi’s spy chief, stated that the UK had helped to organise the rendition.

In a statement issued by his solicitors, Mr al-Saadi said he was settling because his family had “suffered enough”.

Referring to why he had accepted a pay-out, he said: “[My children] will now have the chance to complete their education in the new, free Libya.

“I will be able to afford the medical care I need because of the injuries I suffered in prison.

“I started this process believing that a British trial would get to the truth in my case. But today, with the government trying to push through secret courts, I feel that to proceed is not best for my family.

“I went through a secret trial once before, in Gaddafi’s Libya. In many ways, it was as bad as the torture. It is not an experience I care to repeat. Even now, the British government has never given an answer to the simple question: Were you involved in the kidnap of me, my wife and my children?”

In a statement, a spokesman for the Foreign Office said: “We can confirm that the government and the other defendants have reached a settlement with the claimants. There has been no admission of liability and no finding by any court of liability.”

“Having concluded one part of their quest for justice, they now look to the British criminal courts to hold those responsible for their ordeal to account and await the judge-led inquiry they have been promised.”

The deal to end the al-Saadi action comes while the government is under pressure over its proposals to expand court secrecy in cases such as this one, so they can be fought behind closed doors. Ministers argue that they cannot properly defend the actions of the intelligence and security agencies unless they can withhold part of their case from the public and the individual who is suing them. Critics say the system is unfair and would prevent wrongdoing coming to light.

This is not the first settlement by the government in which the security and intelligence agencies have faced allegations relating to their alleged involvement in the treatment of detainees by foreign regimes.

In 2010, ministers authorised a multi-million pound pay-out to men from the UK who were held in Guantanamo Bay – a deal that avoided their evidence of alleged collusion with the US emerging in open court in what could have become a mammoth legal battle. 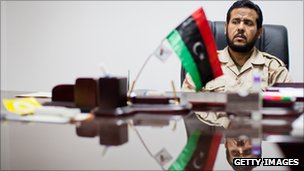 Rebel leader Abdel Hakim Belhaj claims MI6 aided his rendition in 2004, when he says he was tortured

Prime Minister David Cameron then pledged to launch a judge-led inquiry into allegations against the secret agencies – but that probe was later scrapped, with a promise that there would be a new one once the police had finished investigating the Libyan rendition allegations.

Although Mr al-Saadi and his family have settled, a second man, Abdul Hakim Belhaj, is continuing with his legal action against the British government and wants a trial in open court.

Mr Belhaj and his pregnant wife Fatima Boudchar were detained in Malaysia in February 2004 en route to London.

His lawyers claim that MI6 sent a fax to the Libyan intelligence services informing them of their detention. They say they were subsequently flown to Tripoli, blindfolded, hooded and shackled to stretchers. Once there, Mr Belhaj alleges he suffered four years of torture and isolation.

Mr Belhaj is suing the former Foreign Secretary, Jack Straw, and a former senior MI6 official, Sir Mark Allen, as part of his action. Responding to the al-Saadi settlement, Mr Straw said: “At all times I was scrupulous in seeking to carry out my duties in accordance with the law, and I hope to be able to say much more about all this at an appropriate stage in the future.”

Human rights charity Reprieve said there needed to be an immediate “full and fair inquiry” into rendition.

Legal Director Kat Craig said: “Everyone agreed that Lord Justice Leveson could do his work properly with serious criminal charges pending against many of the key people, there is nothing to stop the Libyan torture inquiry beginning tomorrow.”

Aviation supports Africa with 6.8 million jobs and $72.5 billion of...